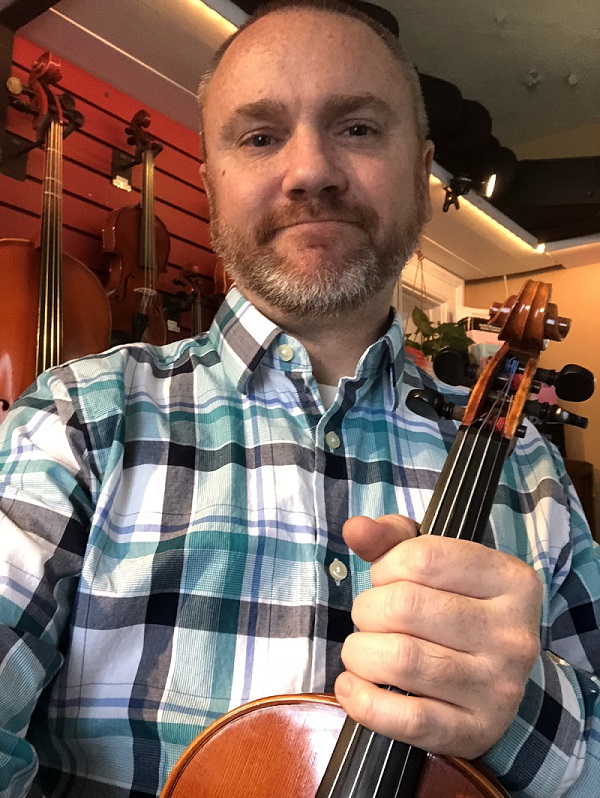 Eben Mann – Violin (Faculty Member Since 2018): Eben Mann is originally from Lake Wales, FL, where he played clarinet, oboe, and bagpipe in the Lake Wales “Highlander” Band, and violin and viola in the school orchestra.  He took private violin lessons from Laura Lawson, Helen Edwards, and KC Davidson, and from Sheryl Gorman on oboe. While in high school, he was a member of the Imperial Symphony Orchestra (Lakeland, FL) playing violin, and was the ISO’s Young Artist’s Competition Winner on oboe in 1992. Mr. Mann is a graduate of the University of North Carolina School of the Arts, where he studied oboe and English horn with John Ellis, and violin with Elaine Richey. While in college, he worked at The Farm House Inn dinner theater in Blowing Rock, NC for four summers (1993-96), as a performing waiter.

Eben has played in dozens of musical productions through the years, and has toured internationally with several Broadway shows, including: Brigadoon, Phantom (Yeston), Big River, and The Music Man.  Before he went on the road, Eben lived in Los Angeles, where he was a member of the Palisades Symphony (Pacific Palisades, CA) and the American Youth Symphony (Los Angeles, CA) under the direction of Mehli Mehta (acclaimed conductor Zubin Mehta’s father). More recently, Mr. Mann has played with various Southeast regional orchestras such as the Asheville Symphony, Asheville Lyric Opera Orchestra, Winston-Salem Symphony, Piedmont Opera, Charleston Symphony, South Carolina Philharmonic, Gardner-Webb University Orchestra, and the Symphony of Rutherford County (NC).

Mr. Mann has lived in Rutherford County, NC for the past 20 years, and has taught oboe at Gardner-Webb University as an adjunct professor, and served as orchestra director (grades 6-12) at Thomas Jefferson Classical Academy (Mooresboro, NC) from 2005-2017. He also operated Pilgrim Farm in Ellenboro, NC, raising poultry, sheep, and goats. Eben is a music composer/arranger, and has had his work published by Shawnee Press. He is currently the director and an instructor at the Wild Roots Fine Arts Academy and the president of the Tree of Life Cultural Foundation, a 501c3 educational nonprofit, both located in Forest City, NC. In January of 2019, Mr. Mann joined the faculty of the Music Academy of Western North Carolina, located in Hendersonville, teaching violin.