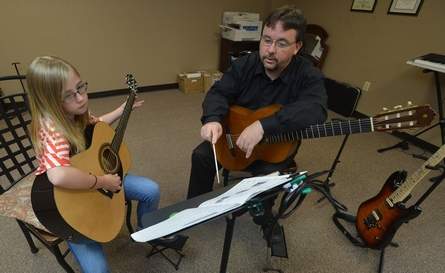 The Music Academy of Western North Carolina has announced significant expansion plans, which includes the rollout of an afterschool program for elementary students.

The academy’s director, Michael Ridenour, said he will begin phasing in a series of new programs at the Hendersonville-based academy over the next year, expecting to add 200 more students to the school.

“This program within itself is a pretty big undertaking,” said Ridenour. “I think it will benefit a lot of kids in Henderson County and prepare them for other programs that already exist.”

Ridenour said there isn’t any kind of string program for elementary kids in Henderson County. Academy leaders want the afterschool program to supplement the strong programs at the middle and high schools along with the Hendersonville Symphony Youth Orchestra.

“We’re trying to accomplish a couple of goals,” Ridenour said. “Number one is just to have a good extracurricular music activity for fourth and fifth graders. Number two is to start to develop, along with the Hendersonville Youth Symphony, an elementary school ensemble. Right now, they start they start at the sixth-grade level but they don’t have anything for the elementary school kids.”

The afterschool program will roll out in September at the elementary schools. The academy also plans to offer onsite classes at new FernLeaf Community Charter School next spring.

In addition to plans for an afterschool program, the academy will begin offering online lessons later this summer using an online program called JamKazam. It is an online meeting site where musicians can play together in real time over the internet. Similar to Skype, instructors will be able to teach their students from anywhere.

“What this does is it kind of takes us outside our brick and mortar building here to where we can offer online lessons,” said Ridenour. “We can offer them here, or since we have a lot of teachers traveling from Asheville and other counties, we can actually offer online lessons and they can do them from their home, but still come through the music academy.”

The academy has about 200 students right now. Ridenour expects the afterschool programs to add 100 to 150 more students and the online lessons to add another 50 for now.

“Just those things were probably looking at a good 400 students total, and that’s kind of being conservative,” Ridenour said. “That will pretty much solidify us as the largest private music school in the county once we get these programs up and going by the end of the year.”

An afterschool program and online courses aren’t the only new additions. The academy teaches many styles of music, including classical, rock, jazz, pop and country. Now they will be adding a folk music program to the mix.

“Western North Carolina is kind of a mecca to folk music,” Ridenour. “We’ve had a lot of calls for folk music like mandolin, banjo and things of that nature, but I’ve never really found someone that was an area expert of that.”

He found that someone in Tyler Cason, who holds a bachelor’s and master’s degrees in music education from North Greenville University and is pursuing a doctorate at the University of Georgia. Cason will be teaching folk guitar, harmonica, mandolin, banjo, songwriting and voice in the folk music program, which is expected to roll out in full this fall.

Next spring, the academy will also begin publishing method books and publications from instructors. The academy currently has 14 instructors, most of whom hold masters or doctorate degrees in music education.

The Music Academy of Western North Carolina was founded in 1997. In 2009, the academy moved to is current location at 235 Duncan Hill Road and had since expanded three times to accommodate student growth. Ridenour said it’s likely he’ll have to expand again next year after all the expansion plans are phased in.

The Music Academy of WNC is the only private music school in Henderson County that offers an extensive, semester-based ensemble program and K-5th grade beginning strings classes. Our Spring semester begins next week on Monday, January 27, 2020! Ensemble students can select from three different orchestra levels (Brio, Sonata, and Cadenza), the Serenata Chorale for middle and high school choral students, guitar ensemble, rock band, folk band, string quartet, and woodwind ensemble. Our beginning strings classes are offered to K-1st grade and 2nd-5th grade students. Visit our ensembles page at wncmusicacademy.com/ensembles, our music class page at wncmusicacademy.com/music-classes, or give us a call at 828-693-3726 for more information and to register! Come join us for the FUN and see why we are the #1 Choice, Best Value, and LARGEST Music School in Henderson County. ... See MoreSee Less

Share on FacebookShare on TwitterShare on Linked InShare by Email